Let’s be honest, no one likes wasting their money on useless supplements that don’t work. That’s why you probably googled this review and ended up here in the first place.

Let me tell you- beyond raw lit is not a waste of money. It’s one of the best pre-workouts in my opinion, and today I’ll share with you why.

Here’s what I’ll be covering in my beyond raw lit pre workout review:

What Is Beyond Raw Lit?

Beyond raw lit is a pre workout designed to not only give you a good pump, but to give you a mental boost as well.

Beyond raw lit gives me a “locked in” feeling whenever I’m using it. It’s well known to be one of the best nootropic like pre workouts.

You can find this pre workout at GNC, and most supplement stores. I like buying mind off of amazon so I don’t have to deal with the scammy GNC supplement workers.

The #1 thing that makes a pre workout good is the ingredients. If you gave me a pre workout that tasted terrible but gave me the best pump known to man, I would 100% take it. And although beyond raw lit tastes great, its ingredients are even better.

Beta alanine is found in most pre workouts. If you’ve ever taken pre workout and felt a “tingling” feeling in your face- that’s beta alanine.

Beta alanine is pretty important for muscle building as it is one of the naturally occurring amino acids in the body. Beta-alanine aids in the production of carnosine. That’s a compound that plays a role in muscle endurance in high-intensity exercise.

Carnosine is like a muscle building block, so the more the better.

Beyond raw lit is unfortunately a bit lacking in the creatine department. This is completely fine if you take creatine another way.

Creatine is known to be one of the best natural supplements to build muscle and strength. In fact, if you take creatine right, you can even get semi steroid like effects from it!

If you take beyond raw lit, I highly recommend you get creatine from another source.

Beyond raw lit only contains 1.5 g of creatine which is way below the dose for muscle growth.

Beyond raw lit has 250 mg of caffeine which is a moderately high amount for pre-workout. This is the perfect amount for beginners-

It’s enough caffeine to give you energy for a pump but not enough to make you too jittery. As always, because caffeine is an addictive substance, it’s important to not always take it and rely on it.

Health line claims that caffeine has a boost on your exercise performance, which you can read about here.

ElevATP is a natural combination of ancient peat and apple polyphenols clinically shown to increase levels of endogenous ATP and support improved strength, power, and performance.

Not a lot of pre workouts have elevATP and that’s a big reason why it made this list. It has 150 mg of elev ATP.

Neuro factor is a natural extract from coffee made from the whole fruit (including the bean).

It’s been proven to have tons of nootropic benefits, fitting in perfectly with beyond raw lit. Beyond raw lit after all is a nootropic pre workout. This pre workout has 100 mg of neuro factor.

Cirtrulline is an amino acid which is great for crazy pumps. Beyond raw lit has 3 grams of cirtulline, which is a pretty good amount.

Nitrosigine also improves nitric oxide in your body, so think of it as a double boost of nitric oxide pump. It isn’t dosed as high as cirulline, but it has a good 1,500 mg in it.

All these ingredients combined make a killer nootropic pre-workout.

There’s a ton of benefits in the beyond raw lit pre workout. While it might not be as strong caffeine or energy wise as other pre-workouts, it’s great because of its nootropic qualities.

If you read about all the ingredients above, you’d know that this primarily helps you mentally focus. If you really want extra energy, you could combine it with a bang or monster energy drink. Either way, I recommend using this if you’re new to pre-workouts.

You get a great brain boost with beyond raw lit pre workout. When I take it, I feel smarter and more focused. Almost like if I was a car, the boost helps me stay in the lane lines instead of going off them.

With beyond raw lit pre workout, you also get an energy boost. This mainly comes from the caffeine and creatine, and while it’s not as insane as other pre workouts, it still does the job.

Like all substances, you should consult with your doctor before taking them especially if you have any health conditions. I had no problem with beyond raw lit and everyone I’ve talked to who’s taken it was fine as well.

There’s nothing unsafe about the ingredients in it, as long as you stay within the recommended dosage.

One side effect myself and others have noticed from beyond raw lit is that your face tingles. Some people like this, others don’t. This feeling is from the beta alanine, but it’s no big deal cause it goes away in 15-30 minutes.

Does Beyond Raw Lit Taste Good?

The important thing to keep in mind is that you’re buying pre-workout for the pump, not the flavor.

Where to Buy Beyond Raw Lit

It’s pretty easy to find beyond raw lit pre workout. Personally, I like getting mind off of amazon.

You can also find it at Walmart and GNC, but be careful because you’ll probably end up getting scammed into buying useless supplements by the GNC workers.

Trust me- I can’t count the times I went into GNC to buy something, and had the sales lady talk to me about “why I need 3 more of the newest supplements” for $200.

Overall, it’s not hard to find and you can get it at most stores. 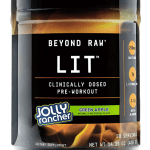 Neutral Grip Pulldown 101: (Get A Massive Back)

Today, we’re going over how to do the neutral grip pulldown. Muscles worked, form guides, and how to use it to build muscle. This exercise

4 Simple Bulking Recipes For This Fall

By Patrik For us living in the northern hemisphere, fall/winter is upon us meaning colder weather &darkness. Food to be eaten during this time tastes

Boyer Coe is a true gentleman and one of the most charismatic figures in the sport of bodybuilding. He is even listed on the greatest