What Muscles Do Pull Ups Work? Everything You Need To Know In 2022

Pull ups are one of my favorite exercises to use for packing on muscle mass. Strength, aesthetics, and size are all benefits of doing them. Today, we’re talking about what muscles do pull ups work.

Pull ups are an absolute must in your workout routine. They provide a broad range of benefits that go far beyond simply strengthening your back muscles. The movement is also extremely functional, which is why it has been used in militaries all over the world to assess upper body strength and endurance. We will go over which muscles are worked by pull ups, the benefits, how to do a pull up correctly (most people don’t), and the differences between pull ups and chin ups.

What Muscles Do Pull Ups Work?

The short answer to the question “what muscles do pull ups work?” is:

All of these muscles worked simultaneously will pack on tons of muscle mass to your body. A pull up is a compound lift, meaning it uses more than one muscle group.

The Lats are the largest muscle in the body, covering the majority of the back except for the traps. The lats also cover the area where the teres major is in the image above.

The Lats are scapula motion muscles, meaning they move the scapula in different directions to help move the arm. The lats adduct (pull down) your humerus, the bone in your arm closest to the shoulder joint, during a pull up.

The bicep is one of the most easily recognized muscles in the body, and it is located on the front-facing side of the humerus. Pull ups will help you get bigger biceps.

The main function of the bicep during a pull up is elbow flexion, which reduces the angle of the elbow joint and brings the forearm and bicep closer together.

The deltoid abducts the humerus (top bone of your arm), while the posterior fibres pull the humerus towards the back.

The rhomboids are two small muscles located between your shoulder blades.

The main function, particularly during a pull up, is to retract the scapula and rotate the shoulder socket (Glenoid cavity).

The Trapezius muscle, so named because of its trapezoid-like shape, covers a large area at the top of the back. It is also the muscle on the back that is closest to the skin.

While the Trapezius muscle serves many functions, during a pull up, the traps keep our scapula (shoulder blades) stable.

The teres major connects the scapula to the humerus shaft.

Function: To provide stability for the shoulder joint, rotate the arm, and, most importantly, to adduct (pull down) the arm when pulling up. This last function is why the Teres major is also known as the Lat Little Helper.

Because pull ups are a big compound exercise, your abs are being worked when you do them. Your core is working to stabilize your body so you can perform the pulling motion of pull ups. Think about it-

Your legs, chest, back, are all hanging under your arms while you do pull ups. Doing them with proper form requires you use your abs to keep everything straight and tight.

When you’re up on that bar, the force of gravity is bearing down on you and you have to hold yourself up via forearms.

Pull ups are a type of compound movement.

As seen above, the exercise engages multiple muscle groups at once, allowing it to reap the many benefits of compound movements such as:

Increased muscle growth – because all of the above muscles are worked out at the same time, as opposed to isolation exercises that target one muscle at a time. Compound lifts will help you gain more muscle mass than isolation exercises.

Improved cardiovascular fitness – Because compound movements require a lot of oxygen, your heart gets a workout as well.

Pull ups are one of my top 5 favorite mass building exercises for your upper body. As discussed before, pull ups are a compound movement in which multiple muscles are worked. You get bigger lats, a huge middle back, and big biceps.

Any pulling motion with your hands will require you to engage your back muscles. Pull ups will make you a stronger climber/rower/swimmer, but you’ll be using your back muscles when doing things like picking up/carrying bags and opening doors. This means that the benefits of pull ups will benefit you throughout your life.

Because you’re hanging for the duration of the exercise, your forearms are put under a lot of strain, which improves grip strength. Grip strength is useful not only in everyday life, but it can also help with compound exercises like the deadlift and barbell row.

How To Use Pull Ups In Your Workout Routine

You should use pull ups in your workout routine 1-2 times a week. Personally, I use it twice on my chest/back day.

Hopefully most of you are able to do a pull up, but it’s probably not for the right sets and reps. If you can’t do at least 8 pull ups, you should substitute with the lat pulldown machine.

Pull Up Sets And Reps

If you can do a pull up but struggle to complete multiple sets and reps, start by increasing set volume and resting between sets. For example, doing 10 sets of 1-2 reps with 90 seconds rest in between is a much better idea than doing 1 – 2 sets until failure (until you can no longer complete any more) and calling it a day. Structured training will help you achieve higher volumes of training and more total reps completed, which will go a long way toward improving your pull ups.

How To Do A Pull Up The Right Way

If you don’t engage your core during a pullup, you’ll be less stable. This results in less lat activation and, as a result, less muscle growth. To get the most out of the exercise, keep your legs straight (engage quads and glutes) and your core engaged throughout.

Gripping too tightly restricts back growth due to a restricted range of motion, and it also increases your risk of shoulder injury and wrist pain. Gripping too tightly can cause your back muscles to not fully activate, putting too much emphasis on your forearm muscles. Just outside your shoulders is the ideal grip length.

Move Your Chest To The Bar

Move your chest to the bar. Try to brush up against it. This will protect you from injuries.

Keep Your Shoulder Blades Back

Keeping your shoulder blades back helps make sure that you are using proper form and engaging the right pull up muscles.

What Muscles Do Chin Ups Work?

With one major exception, a chin up works all of the same muscles as a pull up (see list). Chin ups work the biceps more than the lats. This is because the biceps are unable to activate effectively during a pull up due to the overhand grip (pronated), forcing the lats to work harder.

In addition, the lats are involved in shoulder adduction (see below). For biomechanical reasons (less pressure on the wrists, for example), pull ups generally use a wider grip, which allows for greater shoulder abduction, activating the lats to a greater extent.

If you want to take your physique to the next level, then definitely consider buying my top tier workout program: “WORKOUT OF THE GODS“

It’s SPECIFICALLY designed to get you a greek god-like physique that is guaranteed to turn heads and earn you respect. This is the #1 way to ensure that you’ll get ripped in 3 months, even if you’ve never been to the gym. 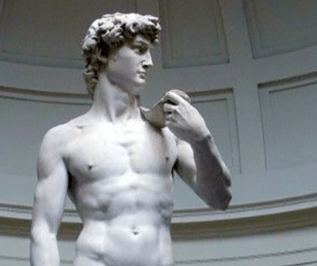 Adonis Belt 101: How To Shred Fat And Get An Adonis Belt

Have you ever wanted to shred love handles and get an adonis belt as fast as possible? In this article, I am going to be